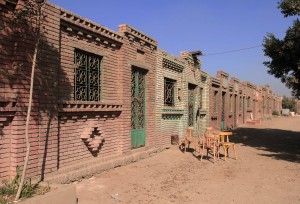 I woke up, showered, dressed, packed my bags, and then stored my bags under the reception desk at the hotel; my flight to Beirut was scheduled to depart at 23:15, which means I had pretty much the whole day to walk around Cairo until then. I had breakfast (fried egg, bread with cheese and jam, and tea) and then exited the hotel and walked east, toward the Museum of Islamic Art, but missed it and continued on to Bab Zuwayla, where I was at yesterday; this time, I entered inside the museum and climbed up the towers to gain a bird’s-eye view of Cairo; I was surprised to see that many people have turned the rooftops of their apartments in to trash dumps and the whole city looked pretty disgusting from up here; also, while at the towers, I talked with an Indonesian guy who was there with his friends and he too commented on the trash collected on the rooftops. After visiting Bab Zuwayla, I walked north through the souqs and then over to Al-Azhar Mosque (supposedly the site of the world’s oldest university; although Morocco disputes this claim); inside the mosque, a funeral had just finished and I waited until the deceased and everyone else had exited before entering inside; once inside, I walked around, looking at the impressive Islamic architecture, and taking photographs while holding my nasty shoes, trying to make sure they didn’t fall. After exploring the insides, I exited out the main entrance and then walked back toward the Museum of Islamic Art; I passed through a winding souq before reaching a main road and finally reaching the museum, but, alas, it was closed for renovation; so I continued west and next stopped at the Abdin Palace Museum, which was opened, but only for another hour; since I decided it would be a waste of money to buy the entrance ticket, rush through, and not see everything, I ended up not going inside; so I walked back to the Egyptian Museum. Before reaching the museum, I stopped for a burger wrap, French fries, and soda at a Hardees restaurant next to Tahrir Square (which has completely been reopened) for some much needed fuel. Once I had reached the Egyptian Museum, I entered inside the gate and then walked around the outside, taking pictures of the building and all the statues and sarcophagi on display; one guide who was waiting there for tourists to prey on kept telling me I needed to buy a ticket (the ticket is actually only to enter the building, anyone can enter the outside); I kept telling him I would, but after taking pictures of everything outside; eventually he left me alone, I finished, and then I exited the museum’s premises. Next, I walked to the Nile River and crossed it using the Qasr al-Nil Bridge; I was then on one of the islands in the Nile, inside the Gezira neighborhood. I then walked up to the Cairo Tower (the world’s tallest all-concrete structure), which was built between 1956 and 1961 with Soviet help and using money given to Nasser by Kermit Roosevelt (CIA) as a bribe to stay on the American side during the Cold War; the Egyptians then built the tower as a giant middle finger to the Americans and nicknamed it “Roosevelt’s endowment”; the CIA fired back by naming it “Nasser’s prick”; later an Islamist group took the American name literally and in the 1990s issued a fatwa against the tower due to the size and shape amidst greenery which “could excite Egyptian women” – hahaha, what a colorful and stupid history. Anyway, I walked near the tower, took some photographs, and then walked back to the Nile River; I walked north on the island, passing by many large dinner cruises before taking the 6 October Bridge back to the eastern bank of the Nile. I then walked by some smaller boats with people trying to entice me to ride for an hour on one of them, but I declined their offers and then walked back to my hotel room, where I did some online research on how to get a Visa to Azerbaijan and started collecting the necessary documents to send in to azerbaijan24.com (a travel agency that can apparently get e-visas for tourists). Finally, at 20:00, my hired taxi was downstairs to take me to the airport (it was the same guy who drove me around the pyramids); I grabbed my bags, took the elevator downstairs, entered inside the taxi, said goodbye to the hotel receptionist, and was then taken to the International Airport. I checked in, went through Immigration, and then had a beer at an expensive restaurant before having a large burger and French fries at an inexpensive restaurant (i.e. Burger King). After that meal, I walked to the departure gate and waited before finally boarding the airplane. The Boeing 737-800 took off and we were heading toward Beirut; it would be an hour and twenty minute flight, arriving at about 00:30. During the flight, I had the in-flight meal (guava juice, bread, yogurt, something else that I can’t quite remember, and a cup of coffee).