After a late night of arriving and conducting online research, I woke up today after 09:00, showered, dressed, and walked out of the hotel to see the port city of Larnaca. I walked northward next to the promenade and up to the “Castle of Larnaca” (also, and more precisely, known as the “Fort of Larnaca”), a fortification was originally built during the reign of King James I (1382-1398) of Cyprus to protect the harbor of the town; like many old buildings, it had fallen in to ruin and had been repaired a couple of times, and the two-storeyed building on the north side of the castle was constructed during the Ottoman period. After paying the entrance fee, I walked to the museum on the second floor and looked at pictures of early Christian basilicas and Byzantine wall-paintings, clay lamps, glass and clay vessels, glazed pottery, metal cooking utensils, and weapons. I then walked around the top of the fortified wall and had nice views of the beach, north and south, and I even saw a man walking his pet monkey, using a lead. Next, I walked around the courtyard inside the castle and looked at the canons and tombstones (both Christian and Islamic) on display.

After touring the castle, I walked west to the Church of St. Lazarus. According to tradition, after the Resurrection of Christ, Lazarus (whom Christ raised from the dead) was persecuted and forced to flee Judea; he then came to Cyprus, was appointed by St. Paul and St. Barnabas as the first Bishop of Kition; Lazarus then lived thirty more years until he died and was buried for the second time; in 890 AD, a tomb was found in Larnaca (present-day Kition) that bared the inscription, “Lazarus the friend of Christ;” upon the tomb’s discovery, Emperor Leo VI of Byzantium had most of Lazarus’ remains transferred to Constantinople (some relics were kept under the altar) and, for compensation, the emperor built the Church of St. Lazarus over the tomb sometime in the late ninth-century AD. I walked inside the church and enjoyed the art covering the inside; I then walked downstairs and viewed the marble tomb of St. Lazarus. Then, I walked to the next-door museum and looked at all the old religious instruments and artwork (no photographs were allowed inside); there were quite a few artifacts on display for such a small museum and I enjoyed my visit. 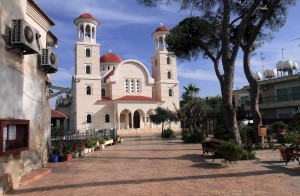 Next, I walked further west to Faneromeni Church, a small twentieth-century church built over a catacomb that dates to the eighth-century AD; the church was closed for lunch when I arrived, so I continued on west to Salt Lake Park (the park north of the Larnaca Salt Lake); I walked around the trees and flowers, enjoying the scenery, and then down to the lake itself to see the flamingos there this time of year (unfortunately they were too far away for my modest camera to capture them); it was a pleasant park and was a welcome change from the mostly arid environments I had been visiting lately. After enjoying the park, I returned to Faneromeni Church, but it was still closed (despite that lunch was over and it should’ve been open according to the posted schedule); I then gave up entering the church and instead just visited the catacombs, which were open; there wasn’t much to see down there and the catacombs basically consisted of two chambers, both empty except for two paintings and two small altars. Once I had seen the catacombs, I walked north by northeast and arrived at the ruins of the ancient city of Kition; however, this archaeological park was closed today, so I walked east back to Foinikoudes Beach, passing by some nice buildings, statues, and many orange trees (orange trees can be found anywhere in this city and many are ripe for the pickin’s). Upon arriving at the beach promenade, I set my sights on trying to find a suitable place for a large afternoon meal; I finally settled on a restaurant and had a feast of Cypriot sausages, bread, a pita stuffed with sheftalia, French fries, and local beer (Keo). After my meal, I stopped at a wine store and bought two bottles of that wonderful elixir; I also stopped at a convenience store and bought some snacks. Now, with groceries in hand, I returned to my hotel room and relaxed for a while before trying the wine; first, I had a bottle of Cypriot dry red wine (produced from Mavro-Maratheftiko grapes) that tasted firstly of cherries and secondly of wild berries; then, I topped that bottle off with a bottle of Cypriot white wine (made from Xinisteri grapes) that was wonderful to drink (it made me wish I had had some fish to go with it) and tasted of lemon, orange, peach, grass, and flowers. After all that wine, I eventually went to sleep after 01:00.