After some much needed sleep, I woke up, packed my bags, and checked out of the hotel. I then walked to the appropriate bus terminal that has buses (i.e. minivans) that travel to and from Cemoro Lewang. I got there the same time as a Russian devochka and we loaded our large bags on top of the bus and then chatted while we waited for thirteen more passengers to show up since these buses only depart when full unless the passengers are willing to cover the cost of the empty seats. While we waited we had some Java coffee (similar to Turkish coffee with a thick sludge of grounds at the bottom) and she told me about India and Bali while I told her about Mongolia and China. Soon, but not soon enough, more passengers began showing up and after the Russian and I had waited close to three hours, the nine confirmed passengers decided to just go and cover the cost of the six empty seats; so instead of paying 30,000 rupiahs, we paid 50,000 rupiahs each – which I think was the wise choice since it meant we actually had leg room and were not crammed tight in there.

Along the road up to Cemoro Lewang, we passed a number of farms that were embroidered on the steep mountainsides in a zig-zag pattern as opposed to terraces like you usually see in Southeast Asia. After nearly ninety minutes of traveling, we reached our destination; I grabbed my bags and walked over to the well regarded Cafe Lava, but they only had expensive rooms left; so the Russian and I walked through town to find a cheaper place and came across two tourists who said they had spent an hour looking for a cheap place and the best one they found was a “homestay” that only charged 100,000 rupiah; thankfully they had done the leg work for us and we could benefit from them; also, thankfully, the homestay had rooms available; we each got our separate rooms with a big bed, clean linen, and the communal shower was also, thankfully, clean. After paying for our rooms and settling in, I walked back to Cafe Lava to eat lunch (Bolognese pasta and Java coffee), glean information from their maps, and use their wifi. After lunch, I walked through town to enjoy the countryside and then I followed a map I had downloaded to the trail to Mount Bromo (an active volcano). At the trailhead I met a French couple and we decided to hike to the top of Mount Bromo together. 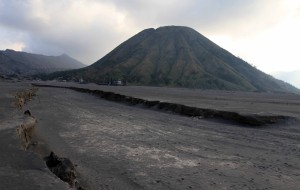 First we took the switchbacks down to the flat caldera bottom below the town, then we walked through the “Sea of Sand”, passed the Hindu monastery at the base of Mount Batok, and then we made it to the base of Mount Bromo. We ascended the volcano up many steps to the viewing platform. I walked along the railing taking pictures, looking at the steaming hole below, but then decided I wanted to view the distant Mount Semeru (another steaming active volcano which could not be seen from where I was). So I left the safety railing behind me and walked clockwise along the edge of Mount Bromo’s caldera. The trail was not too bad, sure it was narrow with steep falls on either side, but the volcanic ash-sand provided sturdy enough footing for me. Walking along the edge I met up again with the French couple and we hiked up to a high point on the caldera, which provided grand views of not only Mount Bromo’s volcanic outlet, but an adjoining caldera that had a flat bottom, though it still did not reveal Mount Semeru to me. By this point the sun was low (it was 16:45) and we were deciding if we should continue; personally I did not want to end up hiking in the dark, but then I remembered that when doing something “there is the right way, the wrong way, and the Hemingway”; naturally I chose the “Hemingway” which turned out to also be the “right way”. So I continued my journey along the caldera’s edge, first quickly descending, then hiking up the loose ash-sand again. The French couple decided to wait to see how far I got before also choosing to go the “right way”.

I then reached the next high point of the caldera which had a stone Hindu monument with withered flowers in its nook; also, from this high point, I could finally see Mount Semeru in the distance. After taking many more photos, the French couple made it up and then shortly after I continued around the edge of Mount Bromo. At this point the trail became less defined and more dangerous; at some points I had to search for past sole marks in the ash-sand to find out where to go next and a couple times the trail dipped into the inside of the volcano making any slip potentially fatal – although I think if you did start to fall, just digging your shoes and legs into the ash-sand would soon put a stop to that, but climbing back up would be difficult. Eventually, as the sun dipped below the mountains, I reached the viewing area again. I then quickly descended the steps and headed back to the trail I had taken. It was becoming darker, but the twilight sky provided me enough light to make it safely back up the switchbacks and in to town; in the distance I could see a flashlight heading in the same direction which I assumed to be the French couple. After making back in to town, I prepared for tomorrow’s sunrise journey and then ate dinner (banana juice, beer, and a egg, onion, lettuce, tomato sandwich with fries). I then went back to the hotel to try to get enough sleep to wake up at 03:00.