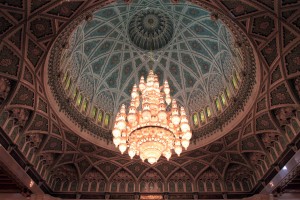 I woke up today, showered, dressed, walked outside of the hotel, and then took a taxi to the Sultan Qaboos Grand Mosque, which was built in 2001 in a contemporary Islamic style with a ninety-meter tall minaret and four flanking minarets (45.5 meters) covering each corner; nside the prayer hall of the mosque is the world’s second largest hand-woven carpet and a fourteen-meter tall chandelier. I entered inside the mosque, walked around the complex, and inside the prayer hall. After exploring the mosque, I walked outside and eventually – after too long of a search – I found a taxi driver that agreed to take me to Old Muscat for a fairish price; of course after entering in to the cab, he tried every trick against me to back out of the deal we had made, but I would have none of it and told him if didn’t fulfill his end of the agreement, I wouldn’t fulfill my end; so he reluctantly drove me to Old Muscat (what a scumbag – like pretty much all taxi drivers in this sorry world). Once in the old part of town, I walked to the Omani-French Museum, which is located in the former residence of the French Consul; it was a present by the Sultan Assayed Faisal bin Turki to the French Consul in 1896; it was later established as a museum in 1992. Inside the museum are displays of French and Omani postal stamps and letters, the history of the relationship between the two countries from the early colonial era (seventeenth-century AD) to the present, the different styles of wooden vessels used by each country, seafaring navigational instruments, weapons, traditional clothing, and one room set up as the French Consul’s office. After walking in to each of the nine rooms opened to the public, I walked out of the museum and over to the Bait Al Zubair Museum, a private museum opened in 1998 that has an impressive collection of Omani weapons, clothes, jewelry, household utensils and cookware, postage stamps, coins, and musical instruments; there was also a separate building with a temporary exhibition of photographs taken throughout Asia by Steve McCurry (of course his most famous photo, the ‘Afghan Girl’ was included), as well as another building, the “Bait Al Oad”, a three-storey building set up to show how Sheik Ali bin Juma and his family lived in the first half of the twentieth-century (they lived very well); outside there was a small display of a traditional souq with shops, fishing boats, and many painted ibex and oryx statues. After completing my tour of that museum, I walked to the National Museum, hoping it might be open, but it was not. Next, I walked to the Old Muscat Gate and then north to the corniche, alongside the Gulf of Oman. When I finally reached the corniche in Mutrah, I walked to a restaurant next to the souq and had an afternoon feast of felafel with a dipping sauce, hummus with chopped almonds and bread, Shish Tawook (marinated chicken kebabs with French fries and a spicy sauce), and a “pomegranate beer” (non-alcoholic and actually a soda with bits of pomegranate floating in it). After eating that fulfilling meal, I took a taxi back to my hotel and updated the website. I also watched ‘Lincoln Lawyer’, which I found well-done and entertaining. I then went to sleep around midnight.